Language: French (+ indigenous languages)
Currency: Central African franc CFA, exchange rate: 1 EUR=655 CFA (as of July 2018)
Prices: same or higher than western Europe
– water 1,5 l = 400 CFA
– meal normal restaurant = 2,500-3,000 CFA
– meal western restaurant = 5,000-10,000 CFA
– croissant = 500 CFA
– double room 1 night = 20,000 CFA+
– one-way train ticket = 25,000 CFA
Visa: Electronic visa is available when you fly in Libreville, otherwise you have to get in at the embassy. It costs 85 EUR and you will need a hotel confirmation or a letter of invitation. Warning! If you are making a fake reservation do NOT cancel it too soon, the immigration will call there to make sure you are staying there. (True story)
Vaccination: Yellow fever
Other diseases: Malaria prevalent, taking antimalarials recommended

Gabon is a rich country from oil and mineral mining and you can feel it the moment you leave the airport. The main road is perfect, lined with beautiful flowers and grass, the cars are fancy, the public transport buses rather nice and not overcrowded. A french supermarket chains like Casino are very common and the buildings are sturdy and well maintained. When driving on the coast, with the beach on one side and the upscale neighbourhood called Louis on the other one, I seriously felt like in Monaco for a while. Libreville is just fancy. And expensive. But we were lucky enough to stay in a friend’s house. He is a Gabonese with Slovak origins, his mum being half Slovak half Gabonese, fully fluent in Slovak, which was just…rare but awesome! We were taken proper Gabonese care of and words can’t express my gratitude to the family, if they ever read this. Anyway, Libreville is nice and clean, but again it’s an African big city and there’s not much to see or do. The coast and the beaches are worth taking a walk, if you are into gambling, you can visit the local casino (I went involuntarily filming a youtube video – it was pretty bizarre) and you should pass by the presidential palace. I say pass by because it is not allowed to take photos of it, not even sit (!) on the benches in front of it. I’m not gonna comment on this strange fact. 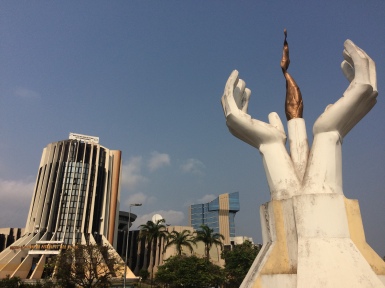 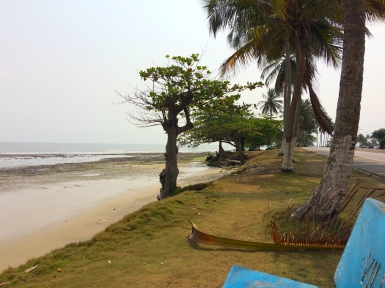 Gabon means gorillas. We spent hours on googling the best place to see them and finally the family we were staying with recommended us the Nyonié reserve, just some 2 hours from Libreville. You go by boat from the Michel Marin port in Libreville and then 1 more hour in a jeep through the rainforest. What makes this place special is that it offers three types of landscape; the rainforest, the savannah and the sea/beach. And let me tell you that all three are just STUNNING.

A French guy built this place basically in the middle of nowhere from scratch and now it is a lovely place with small cabins, a dining room and a common area. The eating is done in community style and the meals are just deliciously delicious! Bouillabaisse, beef bourguignon and crepes for dinner, I mean….yeah baby! The programme is organized, which felt like a drawback for us at first (since we wanna do everything by ourselves), but it was actually nice. Every morning you can go for a 3-hour walk in the rainforest, starting at 5 am. In the afternoons, you can go to a 3-hour safari ride. Meanwhile, you can just rest at the beautiful beach, which you have all for yourself, since the place is really abandoned. As for the animals, we saw bunch of monkeys, mandrills, elephants, buffalos and a panther. We understood quite quick that thinking that we arrive somewhere and we’re gonna see the gorillas during the first walk was foolish. The place is vast, the gorillas are only a few and they are scared of people. You don’t need to think much about it to know know that your chances are really, really (!) low and the only thing you can count on, is your luck. Which we didn’t have. But it didn’t really matter because this place was amazing even without the mighty primates. Although quite expensive (120,000 CFA per person the first night, 60,000 CFA every other night), it was definitely worth it and I strongly recommend it! 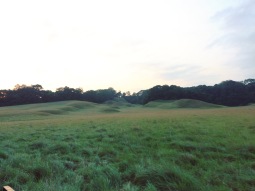 If Gabon equals gorillas when it comes to animals, it equals the transgabonais train when it comes to transport. The train goes from the capital Libreville all the way to Franceville, which makes some 670 km. We had to try it of course. Our first African train! I don’t remember exactly, but I think it runs almost every day except for Saturdays (please check). They run at night, leaving Libreville around 7pm, arriving to Franceville in the morning the next day. Buy your ticket in advance. The tickets are quite expensive, ours was some 25,000 CFA in 2nd class from Libreville to Lastoursville (which is near Franceville) but on the other hand the comfort is quite good regarding the fact that this is an African train. The interior was similar to the 2nd class in the european modern trains, except for the fact that from some reason you couldn’t move the seats, which is a really, really bad feature when you travel at night. A typical African thing, which just doesn’t make sense. From time to time, a staff member passes by, offering sandwiches and breakfast in the morning. A hot chocolate was a real redemption after the sleepless night, warped in a bizarre position in your immovable seat.

The food is somewhat similar to Cameroonian cuisine, which means = delicious! Stews, plantains done million ways, chicken, fish and of course, bush meat. My recommendation, no matter how weird that sounds, is to try the python! It is apparently quite common and it is a BOMB. Usually served in a stew, this protein is the perfect combination between chicken (in texture) and fish (in taste). Don’t get disgusted by the snake’s skin which they usually leave there, it is a true delicacy. Or at least for me it was.
If you are a more conservative person, there are French supermarket chains all over Libreviile, so you can buy (although for a lot of money) basically anything that you buy back home. Or go to a western restaurant, which are also numerous. 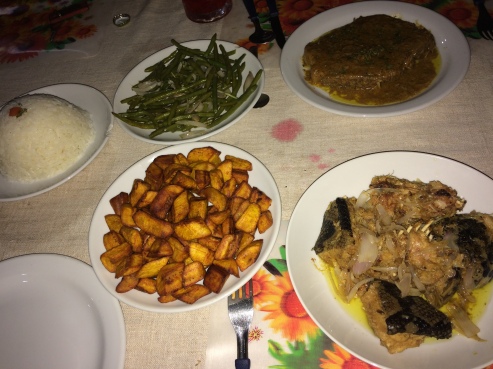 Libreville was a very civilised place judging from the low level of craziness and ignorant reactions when seeing a white person. No wonder, given the number of Frenchmen and other foreigners living and working there, a white man is nothing extraordinary for them. No one will ever bother you, stare at you or offer you things. Sometimes it even seemed as if the people were a bit unfriendly. But it’s not that, it’s just that our mindset was that in Africa, as a white tourist you are attracting attention and everybody is laughing and giving you fist bums all the time. True, people are a bit more reserved here, but still very friendly and nice once you approach them. From what I can tell, they are really kind and helpful.
The mood changes a lot once you leave the big city, based on my experience from the small town of Lastoursville. Laid back, tranquil and drunk are the words which sum it up the best. Everybody is just chilling out in front of their house/shop/shack, drinking the Gabonese beer, giving you a drunken glance when you pass by. No stress mon ami.

Something bizarre to see: Lastoursville caves

Please go to this post.
___
Overall, Gabon was great, foremost because of its stunning nature (and the python meat). I wish we had more time to explore this tiny, yet interesting country. Till next time!
T.

One thought on “Travel guide: Gabon”