I was probably too enthusiastic about the cargo ship trip. So much that someone up there had decided to make me spend 2 more days on it.

Why?
In the morning we took our bags and finally, after more than 24 hours on the boat, we got off, heading to the immigration office.
– Where are you going from here?” The police officer, Kimbi, asked.
– Bouea, and from there to Mount Cameroon, I answered, as this was the plan. Bouea lies in the turbulent region but everyone told us that it was FINE there. Très joli! Well, don’t trust every African you meet, Tereza.
– Bouea?! You can’t go there, there are shootings now!
– Oh really? Ok then (swallowing loudly), then we’ll go to Douala instead.
Douala is the economic capital, the biggest city, situated in the francophone part, nice and calm.
– No no no, let me ask the officers in Bouea first. I can’t let you in now. Go back to the boat and I will come there later.
– What if you they say no?
– Then you will have to go back to Nigeria on the next boat.
Whaaaaaaat?!
I’m starting to stress out again. Go back to the boat, on which I just spent 24 hours?! We have ZERO food left, no drinking water. What if they say no and won’t let us in? How are we gonna survive another 24 hour trip on the boat back to Nigeria? I’m a little girl in a big bad world and I just wanna go back to mama, that’s how I feel right now. But before that I wanna slap all the people that told us Bouea was fine and beautiful and joli. And that stupid officer, Kimbi, too.
…
So we get back on the deck. There is no one left, except for three crew members, all French speaking. One is electrician, one mechanic and the other one cleaner. They are staring at us with surprise. After we explain them the situation, they offer us one of the cabins, this time it’s not the captain’s, but the one that belongs to the regular staff, which basically means it is exceptionally small, smelly and there are cockroaches in it. After few hours we get hungry. Is there something in the kitchen? Are these people going to eat? There is apparently nothing left and these boys will be left hungry till someone brings the supplies the next day. Today is Sunday, so everything’s off the grid. Including the police officer, as it seems.
– We can hold on, we have beer, says the one I befriended, Honoré (the only bright thing in this situation-this fancy French name and the fact that I can speak my beloved French). But me I can’t hold on. I am a hungry spoiled white girl who hasn’t eaten anything since the piece of bread in the early morning. Now it’s 4pm. Tereza wants food! Finally we agree that we give him money, he will go to the village to do groceries and we will cook something.
– Can you cook?
– Sure.
He comes back with some vegetables, parsley, garlic, tomato paste and fresh fish. I enter the kitchen and the first thing I see are the cockroaches crawling basically everywhere. When Honoré sees my face he comes in to assist me. We cook a delicious tomato sauce with fried fish and rice. I hate roaches (who doesn’t), so spending 1 hours in this nasty smelly kitchen preparing something that we were going to eat afterwards, I kinda overcame my limits. But it´s cooked, so it’s fine. I guess. By the time we eat the sun starts to set and the proper hot meal on the upper deck with the magic views on the harbour feels just…great. Once again, nothing is so bad as it seems. And if you have food, water and a place to sleep, you’re fine. You don’t need anything else. Bed, water and food. That’s it.
We go to sleep as we figured that the police guy is not going to show up today. 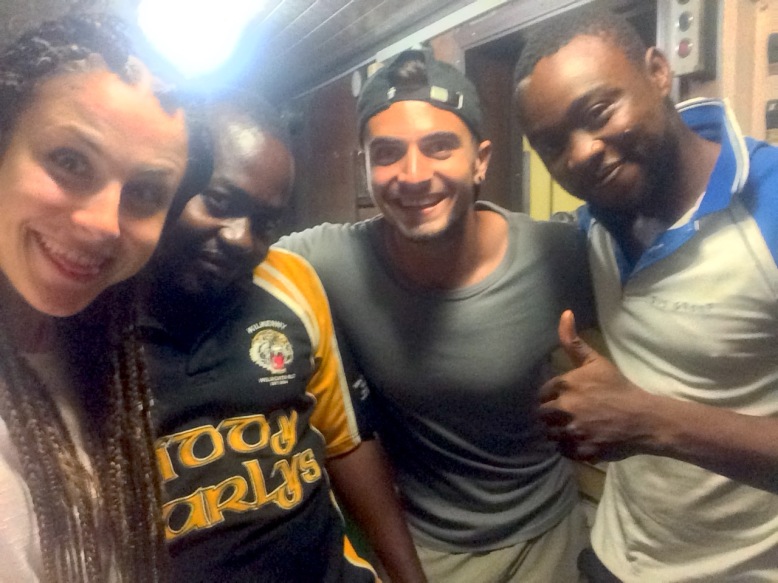 Our new friends from the ship crew

The next morning, first thing we go to the immigration police desk again. It’s Monday, so everybody’s working and we should know about our fate soon. Everybody is telling us that Douala is perfectly fine and if tell him that we were gonna go there, we should be fine. Our hopes are high.
But Mr. Kimbi is not there.
– Where is he?
– He was here like 30 minutes ago but he left. He will come back in the evening.
I forgot to mention one important fact, which is that this bloody Mr. Kimbi took our passports yesterday. I’m boiling inside again. He has our passports! Even though the night on the boat was actually nice, I’m not going to spend any more time here! I refuse!
– Give me his number, s’il vous plaÎt!
– Madame, I can’t give out officers’ numbers like this, says Kimbi’s colleague.
After another hour of haggling and arguing, he agrees to call him (I have to pay for credit).
– He says you can’t enter Cameroon. You will go back to Nigeria, there is a ship that leaves tonight.
You can guess how much stress has already accumulated in me during the past 3 days. Now it was the moment to let it all out. Full force. Shouting and swearing in French is swiftly changed by crying, desperately like a little child, crocodile tears rolling down my cheeks. I don’t know what to do.
…
– Hello is this the Czech consulate in Cameroon?
– Yes it is, but we are actually closed for holidays. Please call the French embassy to deal with your problem madame.
– Hello is this the French embassy? I am a Czech national and I am stranded in… – Madame, if you are Czech, you have to call the Czech embassy, we can’t deal with Czech people, we are a French embassy.
The nearest Czech embassy is in Nigeria and nobody has that much credit to call there. We don’t have enough money to pay them.
Despair level? 1,000,000,000.
…
– Is this Madame Tereza?
– Yes, who’s calling?
– It’s the Czech consulate, again. I can’t stop thinking about you down there. Let me make some calls and see what we can do for you to get you out of there.
– Ok. You’re an angel.

Few hours and calls later we are told that there will be a car coming from the consulate to take us to Douala, with the driver signing a paper for Kimbi promising that he will take us straight to Douala. No Bouea, no anglophone regions. Another few hours waiting for the driver to come, a little bribe to Kimbi and at 1am we finally arrive to Douala. We are in Cameroon. WE ARE IN CAMEROON! Life is beautiful.

More to come in the next posts.
T.

One thought on “Cameroon diaries II.: Stranded at the port”